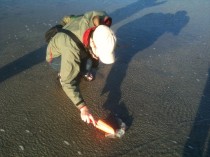 Discovering what is inside a jellyfish

Sarah’s undergraduate degree focused on both science and art, which also required a great deal of accuracy and attention to detail in her artwork. During this time, she also worked with ISU’s Insect Zoo to create educational images of insects for middle school students. She also interned with a professor at the College of Veterinary Medicine, where she created a series of pen and ink illustrations for his book on canine neuroanatomy. It was then that she realized the educational value of her illustrations. The thought of teaching generations of students through her artwork was extremely satisfying and this prompted her to get a master’s degree in medical illustration.

In graduate school, Sarah learned to solve a broad range of communication problems through visual means. Here, she took a surgical techniques course, as well as viewed numerous human surgeries. To ensure accuracy and clarity in her artwork, she collaborated with doctors, surgeons, and illustrators. Accuracy and clarity are extremely important in anatomical and surgical illustrations intended for anyone in the medical community. Her illustrations have appeared in several professional exhibits, including the 2011 Association of Medical Illustrators Salon.

As a medical illustrator, Sarah is passionate about creating clear and accurate images that are used to educate patients, doctors, surgeons, and the healthcare community.